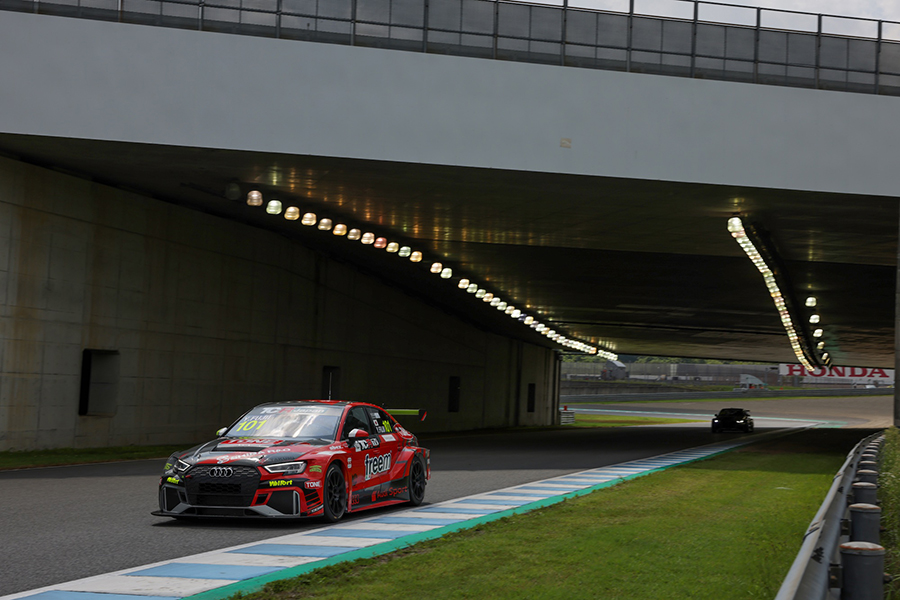 TCR Japan returnee Yuki Fujii claimed his maiden victory in the championship at the end of the Sunday race at Twin Ring Motegi that provided full of drama. Fujii and his Team Hitotsuyama Audi took the lead at the start, keeping newcomer Yusuke Shiotsu’s DOME Racing Honda Civic at bay with an intimidatory manoeuvre. Shiotsu recovered to second after a spin but couldn’t get close enough for threatening Fujii.
Shiotsu was on pole after setting a new lap record for TCR cars of 2:01.196, while ‘Hirobon’ started from the back of the grid after making a track limit infringement during his flying lap. Masanobu Kato’s Audi that was on P5 did not start for the formation lap and was pushed by the marshals to the pit lane.
There was drama right after the start, Fujii from P2 started better than Shiotsu and took the lead after their cars make contact on the straight. ‘Hirobon’ made a great start but clashed with Mineki Okura’s Alfa Romeo into T1 and collected the Honda Civic of ‘Mototino’; both went off onto the gravel. Moments later, Fujii half-spun and Shiotsu spun from second in avoidance; in the following turn, Okura and Kenji Suzuki crashed and the safety car was deployed.
Racing resumed in lap 5, with only seven minutes left; Fujii led from Masayoshi Oyama, Keiichi Inoue, Kato who had started from the pit lane, Shiotsu, ‘Mototino’ and ‘Hirobon’ who was one lap behind after being recovered from the marshals. Both Okura and Suzuki had retired.
Soon Fujii was able to pull away, while Kato and Shiotsu passed Inoue for P3 and P4; at the beginning of lap 7, Kato tried to overtake Oyama into T1, but outbraked himself and went wide; Shiotsu took advantage from the situation and moved into second ahead of Oyama. Shiotsu tried to close the gap to the leader Fujii, and set the fastest lap, but time was ticking out and he had to settle in second place, five tenths behind Fuji, while Oyama completed the podium.
‘Hirobon’ finished seventh and extended his leadership in the standings of the Sunday Series.
TCR Japan will return to Twin Ring Motegi for the next race meeting on 16/17 October.