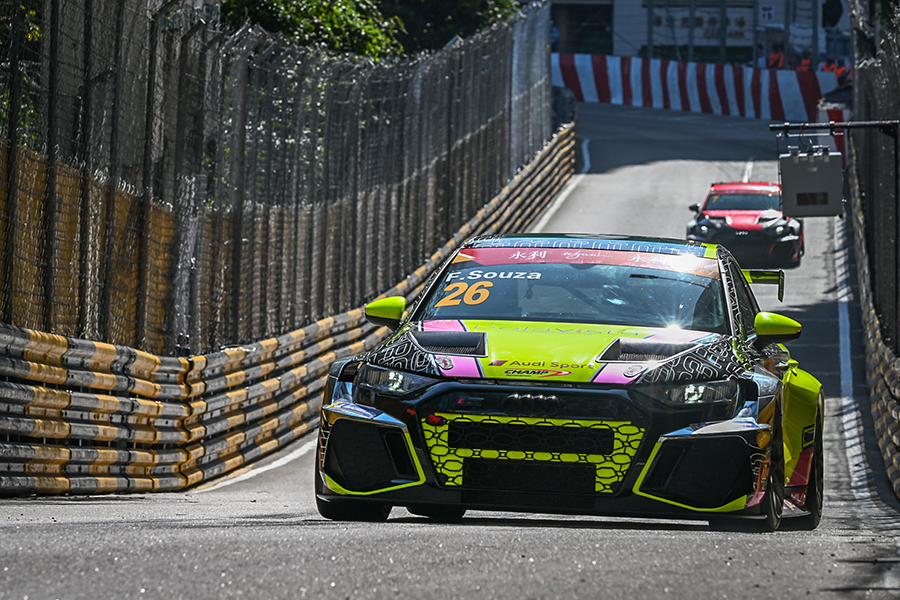 Filipe De Souza became the first Macanese driver to win the Guia Race, as he was victorious in the first race of the TCR Asia Challenge. De Souza and his CHAMP Motorsport Audi RS 3 LMS led home two other Audi cars, Hu Heng’s and Cheong Chi On’s (Xinli Team) at the end of a crazy race that saw a lot of competitors eliminated by incidents.

The field started behind the safety car following the crash of Lai Jing Wen’s Audi during the formation lap. Actual racing began in lap 2, with Andy Yan’s Honda leading from Lo Sze Ho’s Hyundai; however, Yan hit the barrier at the Lisboa bend and Lo Sze Ho spun in avoidance. A few cars managed to squeeze through, but most of the field was blocked behind them, while Wong Chin Hung’s Honda crashed at the Mandarin. De Souza found himself in the lead followed by Hu Heng, Cheong Chi On and Ryan Wong.

In lap 2, Hu Jia Xin’s Honda crashed at T12, while Ryan Wong’s Audi spun at Lisboa at the beginning of lap 3 and dropped from fourth to eighth; Andy Yan had rejoined and was running in 11th position, but then dropped down as his Honda was badly damaged.

De Souza was able to build a gap ahead of Hu Heng who was closely chased by Cheong Chi On; behind them Jason Mok was defending the fourth position from Eurico De Jesus whose Honda hit the barrier at Lisboa at the beginning of lap 6.

At the beginning of the last lap, Jason Mok tried to overtake Cheong Chi On for P3 at the Lisboa, but outbraked himself and went straight.

De Souza was first under the chequered flag ahead of Hu Heng and Cheong Chi On; Mok and Lo Sze Ho were classified sixth and eighth respectively.