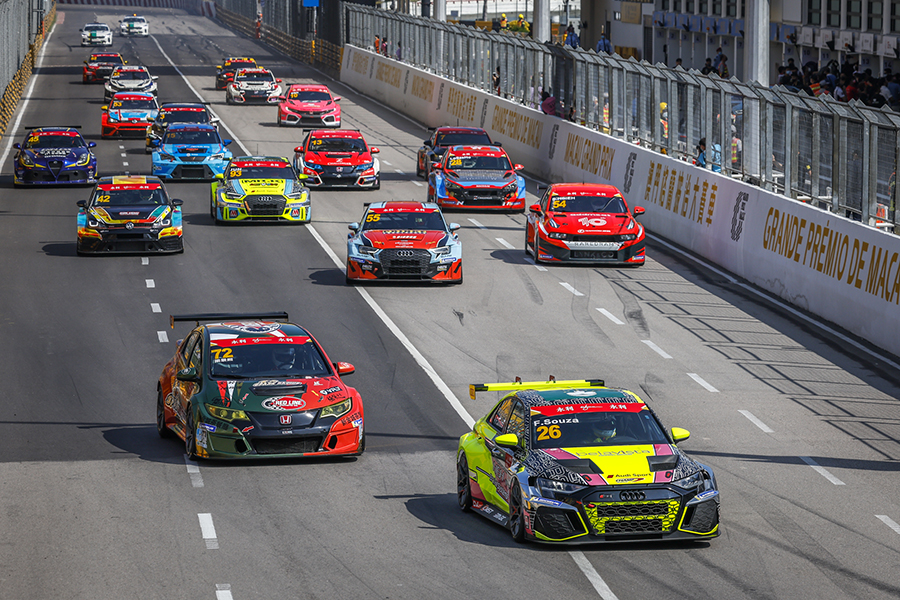 Filipe De Souza scored two wins from the two TCR Asia Challenge races at Macau. After his victory in yesterday’s Race 1, the local hero encored in today’s second race that turned into a carnage, with two safety car interventions, a red flag and only three racing laps.

Tan Tzer Szen’s Hyundai i30 N stopped in the formation lap and was removed, while Hu Heng who should have been second on the grid started from the pit lane. At the start, De Souza made good use of the pole and led from Leong Keng Hei, Cheong Chi On and Chan Weng Tong. During the first lap, Chan overtook Cheong for P3 and began to put the pressure on Leong, while De Souza pulled away building a five-second gap. In lap 2, Cheong and Lo Sze Ho moved into second and third, passing both Chan and Leong just before the safety car was deployed after Yiu Lung’s Alfa Romeo Giulietta had crashed.

Race resumed in lap 5, with Cheong keeping the field behind and leaving De Souza to open a big gap again. Lo Sze Ho passed Cheon for second and began chasing De Souza, but the safety car was called back into action because Mok Tsz Wang’s Honda had crashed at the Mandarin bend; uphill, Leong spun and rejoined at the back of the field.

The green flag was waved at the beginning of the ninth and last lap with De Souza now closely chased by Lo Sze Ho and Andy Yan. As they negotiated the Mandarin, Lo Sze Ho crashed and bounced back spinning in the middle of the track where his Hyundai i30 N was collected by the Audi cars of Ryan Wong, Huang Ruo Han and Cheong.

Yan stole the lead from De Souza before the Lisboa bend, but the race was red-flagged and De Souza was declared winner ahead of Lo Sze Ho and Yan, according to the classification at the end of lap 8.